Even though I think it's a stupid holiday, it's pretty easy to just go along with Thanksgiving. The whole family gets together, awkwardly sits in silence while grandparents give some hooray-America prayer of thankfulness and then everybody eats a bunch of delicious yams and stuff. There is pumpkin pie at the end and also probably a Big Game, giving the sports fans an excuse not to have to sit around and make forced conversation with the rest of us. The food is good and everything, but Thanksgiving is really one of those unpleasant and morally bankrupt celebrations of hypocrisy that always makes me kind of uncomfortable. I'm not going to protest and refuse to eat the turkey, but I think that sometimes it's important to remember that we're living on occupied Indian territory and that our country was responsible for the long and slow holocaust of the indigenous peoples of America.

But beware, for the graves of the ancients do not rest easy and the vengeful spirits await their chance to return and repay the wrongs done against them! Here are three of my favorite Indian revenge movies.

Director William Girdler is an exploitation wizard who conjured up many excellent films during his brief career. They include Abby (The Black Exorcist), Grizzly (Jaws, but it's a bear), and Day of the Animals (one of the craziest animal attack movies ever, with a master performance from shirtless Leslie Nielsen). The Manitou was his last film before dying in a helicopter crash at age 30 and also possibly his greatest. It tells the tale of a young woman played by Susan Strasberg who is shocked to discover a giant tumor growing on her back, and even more shocked when she finds out from an old Indian shaman who lives in New York and talks with a Yiddish accent that the tumor is actually the fetus of another old Indian shaman who is reincarnating himself inside of her so he can take his revenge on the white man. The thing eventually births itself out of her and the naked little guy covered in goo that runs wild through the hospital is played by Felix Silla, the tiny actor responsible playing Cousin Itt on the Addams Family and climbing inside a million and one little monster suits over the years. This guy can flay the skin off people's bodies with his mind. The film climaxes with Tony Curtis channelling electrical power from an enormous old computer into topless Susan Strassberg as she floats in the fourth dimension and shoots lighting bolts out of her fingers. I never imagined that the spirits of the elders would be so good at fighting laser battles until I watched this gem.

When some anthropology students go digging up Indian artifacts in the California desert despite the warnings of some old man, one of them gets possessed by the spirit of a crazed warrior named Black Claw and starts killing off his classmates. The movie is a fairly straight forward slasher with some good Indian themed kills involving tomahawk decapitation, bow & arrow to the eye and at least one particularly gruesome scalping. I am not a fan of director Fred Olen Ray, his movies tend to be way too intentionally campy for me to enjoy. But he's going totally straight-faced into horror with this one and he pulls it off pretty well. One unique touch is the weird disembodied head of Black Claw that sometimes flies around looking like a murderous Jambi. You could call the movie a rip-off of Death Curse of Tartu since it has pretty much the exact same plot, but the director of that film, William Grefe, was a sort of mentor to Fred Olen Ray so you've got to imagine that he intended this more as a gory tribute. It has a sort of sincere quality to it, like he's still hungry to prove himself, as opposed to the cynical irony of some of his later movies. Along with The Manitou, it has no understanding or interest in actual Native American culture. But by at least acknowledging that the students are doing something bad, it implies that Native history is something which can only be disrespected at the peril of losing your scalp. 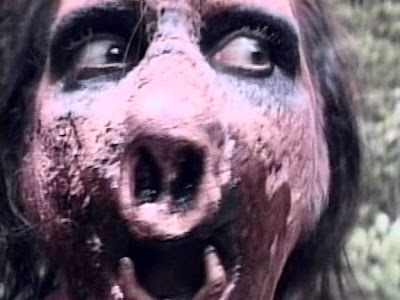 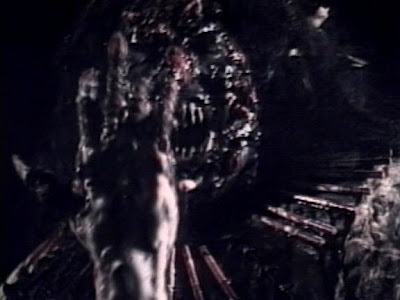 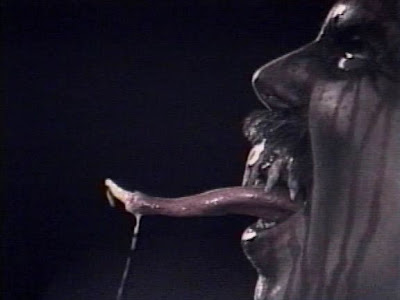 Another camcorder triumph from the world of anti-budget SOV horror. A bunch of profoundly unattractive young people gather in the Missouri woods to go camping and begin telling tales (unendingly long tales) of ancient Indian demons. They say whatever magic incantations are necessary and summon forth the whole collection of animal-themed entities. Each one infects and controls a camper, hideously transforming them into some backyard Island of Dr. Moreau disaster and causing them to hunt and kill their friends. The appeal of homemade horror movies like this is found in the raw and undistanced realness on display (it's like peaking in on some homely teen's home movies from that one sad time all the unpopular kids went camping together) and the level weirdness which is discovered in the depths of unrestricted imagination. Just look at the make-up jobs on those possessed campers in the pictures. The monsters are all genuinely creepy in surprisingly unexpected ways. And a lot of the camera techniques are so weirdly abrasive that almost seem intentionally avante-garde. But the film as a whole is so poorly put together and filled with so many agonizingly boring parts that the thing as a whole creates this incredible, uneasy dissonance that's both unnerving and fascinating. This is good stuff and once again pays no heed to the reality of historical myth, coming up with its own totally insane idea of Indian spirits.

Enjoy your Thanksgiving, but try to remember whose land we live on and the people and cultures that have been lost. And not only because they may one day come back for bloody revenge! 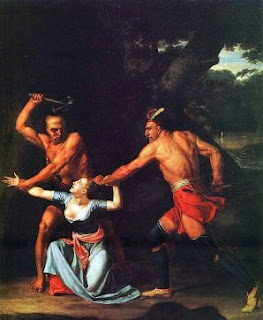