The Midnight HourThis movie achieves that rare distinction of being a family friendly "horror" movie that is more purely enjoyable than most genuine bleeders. It mixes a bunch of horror elements together including zombies, vampires and ghosts, it builds an entertaining story around a few simple ideas, and most importantly it nails the tone of frightening fun that really evokes the Halloween spirit I remember from being a kid. Halloween isn't grim or vulgar. But it isn't exactly safe either. This is a key distinction for what separates the type of movie I think of as being good for Halloween from those that are just straight-up good horror movies. It's got to have chills, but it's got to be fun. "The Midnight Hour" does both very well. I try to watch it every October. 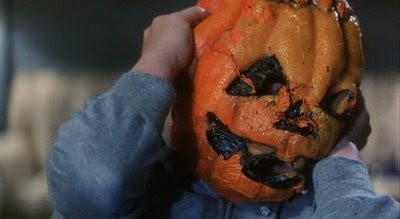 Halloween III: Season of the WitchUnfairly maligned over the years, I think this movie has finally started to find an audience of appreciative fans. But sometimes it's hard to judge how people feel outside my immediate circle of friends, so if you still think of this movie as "the lame one that doesn't have Michael Myers in it," get with it! This is by far the best of the series after the untouchable first. If only John Carpenter's movie had been a little less lucrative maybe they would have followed through with their plan to release a different, unrelated Halloween-themed movie every year instead of banking on the dwindling creative returns earned by trotting out poor old Michael Myers and getting him involved with such lamentable movie sink-holes as the Cult of Thorn and Busta Rhymes. This one stars Tom "Thrill Me" Atkinson as a disgruntled doctor investigating a sinister plot involving children's Halloween masks. The truth behind the mystery is so outrageously absurd that I won't spoil it for those who haven't ever watched this (or read Wiley's blogpost lower down on the page). All I've got to say is check it out. This one is unique.

HauntedweenHere it is guys, the last good slasher of the golden age. Made in 1991, just as slasher movies were briefly falling out of fashion for the few years before "Scream" and its slick, soulless, disaffected and ironic progeny were flushed out, forever clogging the plumbing of the slasher horror film, "Hauntedween" stands as a final glistening example of a genre now unable to authentically function without falling back on shallow tribute, over-stylization and an unbearable lack of innocence or sincerity. Who knows what secret hopes or ambitions writer-director Doug Robertson may have placed in this, his only movie. But it has the relaxed feeling of someone just playing around, having fun making the type of movie they enjoy. No one is trying to prove anything here. It's wonderful. A movie like this cannot be made today. It comes not only at the tail-end of the cycle of slasher films that dominated the 80's, but it belongs to another breed of vanished cinema as well. It's representative of the type of regional exploitation filmmaking that flourished in the 60's and 70's (the region being Bowling Green, Kentucky in this case) and enjoyed its final days of decent distribution and profitability during the great mom 'n pop home video boom before being cornered out of the market by studio-sanctioned "independent" movies. There is no longer a market for something this sloppy, amateurish, delightful or whole-hearted. The plot involves a bunch of college kids putting on a haunted house only to be terrorized by a maniac who lived in the house when he was young. Pretty standard stuff but totally enjoyable and full of rich Halloween atmosphere. Don't let movies like this be forgotten.Happy Halloween! -Tommy